After the military coup in Myanmar, deep concerns were raised by the Rohingya Muslims as some military leaders were previously accused of persecuting and deporting Muslims. OIC stressed on the need to ensure the safety of the Rohingya. 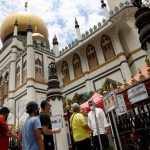 The mosques of Singapore dedicated last Friday’s sermons to talk about forgiveness and peaceful coexistence, after the authorities revealed that […]