Terrorism has recently been subjected to an unprecedented major decline. That is why Sawt Alhikma is launching a campaign to answer the difficult question: Has Terrorism Ended?

We invite everyone to participate by sharing their opinions on the future of this devastating phenomenon. 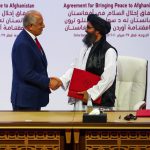 The Agreement Between the Taliban and the United States (Infographic)

The United States and the Taliban announced that they signed an agreement that ends the longest war in American history. They want to start a peaceful political settlement dialogue, which could become a turning point in the future of Afghanistan.