The Interior Ministry in Germany announced the formation of an “independent expert group on Islamophobia” to combat the phenomenon and prevent the marginalization of Muslims and their persecution by supporters of the Far Right. 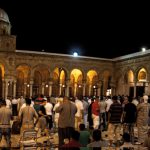