A report by The Independent newspaper revealed that the number of Muslims who decided to emigrate from England recently increased due to the rise in religious hate crimes. They were forced to leave their homeland to feel safe while practicing their religion. 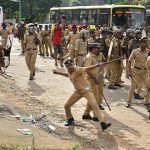 The New York Times revealed new evidence, a video of police killing a Muslim as he pleaded for rescue, confirming […]