The Coronavirus Fights Against Islamophobia

A different cordial tone appeared in the speeches of British public figures who congratulated Muslims on Ramadan. This contradicts the well-known influence of the Far Right extremists on England, which encourages hate speech against Muslims! 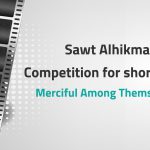 A jury, consisting of filmmaking specialists, selects the winners of the Sawt Alhikma Competition for short films, Merciful Among Them […]