Al-Nur Bimaristan in Damascus was one of the most important Islamic hospitals known to Muslims. Many patients from different countries of the Islamic world used to visit it. It provided its services for several centuries until a new hospital was built in Damascus. 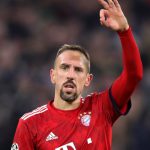 Franck Ribéry.. How Did They Convert to Islam?

Frank Henry Ribéry was born in 1983 in Boulogne-sur-Mer, France. He showed a talent for football at the age of 7, so his father enrolled him in a local football club. He went on to become one of the most prominent players in France.