There Is No Racism in Islam

Many capital cities recently witnessed protests that included hundreds of thousands of people, and many celebrities declared their support and solidarity. Islam called for the same demands 1400 years ago and considered it a constant in human life. 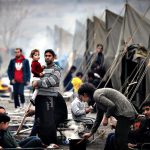 On June 20 of every year, the #UN celebrates World Refugee Day. It is dedicated to highlighting the refugees’ concerns, […]

A Danish court has sentenced a severe imprisonment ... Read More

The Celebrations of Bosnia and Herzegovina Muslims

Muslims in Bosnia and Herzegovina held a festival, ... Read More

Even though Afghan wives of the collapsed ISIS ... Read More