Several British universities witnessed a debate about equality and non-discrimination between students on the basis of religion, after a study revealed that anti-terrorism policies within universities marginalize Muslim students and limit their right to freedom of expression. 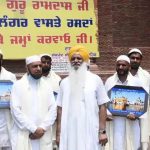 Charity from Punjab Muslims to a Sikh Temple