An American Muslim student filed a lawsuit in Arizona against his college and political science professor after he was shocked by the test questions that offend Islam and link it to terrorism. Which is more important: academic freedom or respect for religions? 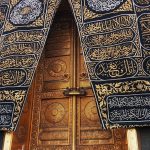 Door of the Holy Kaaba (Infographic)