Muslim community leaders in the Philippines, with the support of human rights activists, are preparing to file a lawsuit to repeal the anti-terrorism law, ratified last June, since it leads to discrimination against the Muslim-majority of the Mindanao region. 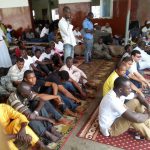 Liberian Muslims Are Demanding a Holiday

A group of Liberian Muslims recently petitioned to the House of Representatives, demanding that Eid al-Fitr and Eid Al-Adha be considered official national holidays that would grant them days off. LIBERIA is the one country in West Africa that doesn't adopt Muslim holidays.

Muslim Voters in the US

Muslim community leaders in many US states started ... Read More

In recent years, an increase in violence in ... Read More

The German government is launching a project that ... Read More

After the death of ISIS leader Abu Bakr Al-Baghdadi last year, researchers discovered short links, spread through social networks, leading to a giant and secret electronic library and considered it a ticking time bomb! What is the story of this deadly library?!