The Kingdom of Morocco has succeeded in becoming one of the pioneering countries in spreading and promoting coexistence, respect for religions and interfaith dialogue. It became an example to follow, which drove European and African countries to study its experience. 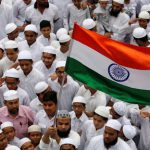 There Is No Place for Muslims in Mumbai

Many Muslims in India were shocked to reveal that the Hindu population in Mumbai does not allow Muslims in their neighborhoods or allow brokers to rent out homes to Muslims, except for poor neighborhoods that rent out modest homes that lack the most basic services.