Attacks on Places of Worship in Africa

In one week, gunmen attacked a mosque in Guagua De-Sapo, Nigeria, and kidnapped many hostages, and ISIS targeted a church in Kivu, Congo and killed 19 people, as part of a series of attacks on places of worship in Africa that show terrorism has no religion. 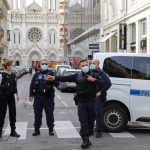 Negative Consequences of the Nice Attack

The Nice Attack reveals that Muslims are the most affected by terrorism, as European countries began deporting immigrants from the […]