Negative Consequences of the Nice Attack

The Nice Attack reveals that Muslims are the most affected by terrorism, as European countries began deporting immigrants from the Middle East. Western countries advised their Muslim citizens to avoid going to specific countries in Europe for fear of harassment. 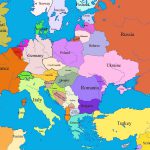 The Prevalence of Islam in Europe (Infographic)

A recent study suggested that many European countries may become Muslim majority within the next 200 years, as a result […]