“Handcuff and Slaughter Them”

The terrorist organization, Boko Haram, slaughtered 43 farmers and wounded 6 others, who were working to feed their children, near the northeast Nigerian city of Maiduguri two days ago, based on an adopted policy to “handcuff and slaughter them.”

This heinous crime shocked the world, which prompted many countries and organizations, led by the OIC, to denounce the incident and affirm that Islam is innocent of such crimes committed in its name, calling for global solidarity to eliminate terrorism. 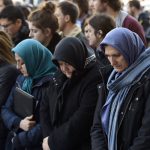 Despite Islamophobia, Muslims have earned high-profile positions in European governments. In the following video, we learn about how many Muslims are in these governments and how countries deal with the right of Muslims to be represented in leadership positions.