Despite Islamophobia, Muslims have earned high-profile positions in European governments.

In the following video, we learn about how many Muslims are in these governments and how countries deal with the right of Muslims to be represented in leadership positions. 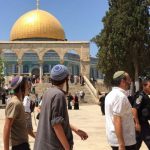 Teaching the Torah at Al-Aqsa Mosque!

According to the Ministry of Awqaf (Endowments) in Palestine, the occupation committed 23 desecrations of the Al Aqsa Mosque, and […]