Man Jailed for Stabbing an Imam in London

A court sentenced a British man to 11 years in prison for stabbing Imam Raafat Maglad at the London Central Mosque last February. The accused admitted he was guilty of severe bodily harm with intent and possession of a bladed article in a public place. 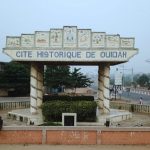 Ouidah in Benin features adjacent historical buildings for different religions. This film shows how members of local religions helped in constructing one of these buildings, establishing decades of coexistence.