The Number of Muslims in Japan has Doubled 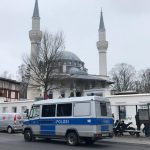 Civil organizations in Europe noted that the mosques in Germany were subjected to 122 attacks in 2020. The indicators of […]