Denial of Rumors about Muslims in Austria

The Austrian media denied the rumors claiming that the Austrian government decided to prevent Muslims from exercising their political rights, noting that the reason behind these rumors is a controversial law to combat extremism, which was rejected in Parliament. 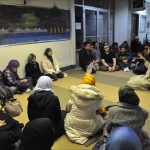 A Study on the Conditions of Muslims in Illinois

The authorities of Illinois, US will conduct a study on Muslim conditions and their civil and religious rights. Muslims hope […]