A Study on the Conditions of Muslims in Illinois

The authorities of Illinois, US will conduct a study on Muslim conditions and their civil and religious rights. Muslims hope that the study will contribute to the societal integration in Illinois, which includes the third highest percentage of Muslims in America. 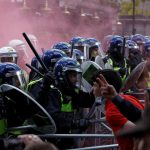 A Global Front to Confront the Extreme Right

The American magazine, Foreign Policy, warned of the growing dangers of extremist Far Right groups in many countries of the world, after their ideology was mainstreamed into political parties. A united global front is needed before it is out of control.