The local press in South Africa praised the measures that Muslim groups enforce to bury dead corona virus victims, for they adhere to the highest degrees of prevention and recommended scientific methods that protect the elderly, without violating Islamic law. 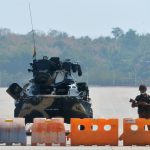 After the military coup in Myanmar, deep concerns were raised by the Rohingya Muslims as some military leaders were previously […]