The Global Coalition to Defeat ISIS stated that the terrorist organization is regionally defeated and can’t hold any territories in Syria or Iraq. However, they remain a threat as they still carry out terrorist attacks. 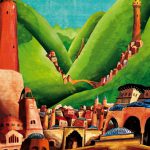