A French Muslim expects the court’s judgment in a lawsuit he filed in France after being fired from his job at CDG Airport for praying at work, which the officials viewed as a “serious radicalization”. His lawyer said that anti-Muslim campaigns led to the decision. 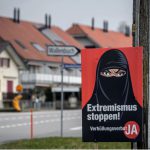 Face Masks Are Mandatory and Burqas Are Banned!