Face Masks Are Mandatory and Burqas Are Banned!

Foreign Policy Magazine noted that the ironic timing of the new Burqa ban in Switzerland proves that it was not due to security concerns, but to normalize anti-Muslim discrimination. The number of Muslims wearing Burqas is no more than 37 in Switzerland. 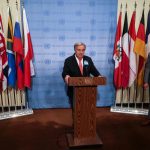 Commemoration of the First International Day to Combat Islamophobia

The UN showed an implicit response to OIC and Sawt Alhikma Center’s call to declare March 15 as International Day to Combat Islamophobia, after SG António Guterres joined an OIC event at the UN headquarters in NY on Wednesday, to commemorate the first anniversary of this day.