Azhar Observer launched Zionist allegations e-campaign to refute the fallacies of the occupation about the Palestinian Cause.

Sawt Al-Hikma Center takes part in this campaign and calls on its followers to write about these allegations and reveal their truth. 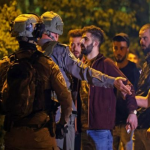 Crimes against humanity in Palestine (Infographic)

Accusations have been made against the occupation forces of committing “crimes against humanity” in Palestine, but what does the term […]