Mahmud Jamal was appointed to the Supreme Court as the first Muslim and first non-white judge in the 146-year-old history of Canada.

The Canadian government stressed that he had a distinguished career, throughout which he’s remained dedicated to serving others. 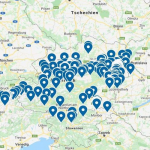 A «National Map of Islam» sparks a crisis in Austria

An interactive map published on the Austrian government website, sparked an outcry, especially among the Muslim community which constitutes 8% […]