«The Truth of Islam» in 13 languages

With the aim of spreading moderate thought and introducing the principles of Islam, Al-Azhar University in Egypt announced the availability of “The Truth of Islam” book series in 13 different languages, during the 52nd edition of the Cairo Int’l Book Fair. 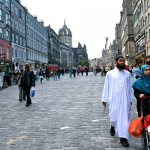 A recent public inquiry revealed the extent of Islamophobia spread in Scotland where 100,000 Muslims live. The majority of Muslims […]