Sawt Al-Hikma Center of the Organization of Islamic Cooperation condemned the recently observed abuse of Islam and its sanctities and the dissemination of violence and hatred against Muslims through several digital games that have spread and achieved wide popularity worldwide.

The center said that it had kept an eye on what was raised over the past weeks about a digital game that included the demolition of the Holy Kaaba, noting that this offence comes within a wave of similar offences in other games, which reveals the extent to which Islamophobia has permeated the digital games market estimated at hundreds of billions.

“Sawt Al-Hikma” added that the deliberate abuse of Islamic sanctities by the developers of these games, with the aim of achieving popularity and promoting their products by “stirring controversy”, is an unjustified provocation to the feelings of Muslims all over the world who refuse the abuse or insult of their religious sanctities in any way. The center considered that the continuation of this approach -abuse of Muslims – inflames feelings of hatred and contradicts the many attempts supported by states and organizations to promote dialogue and coexistence.

Sawt Al-Hikma Center called for taking the necessary steps to put in place strict international laws to control this market, and to stop the steady growth in violent and insulting games, with the need to adopt a charter and legislation prohibiting any games that insult religions and their symbols, or abuse religious sanctities. 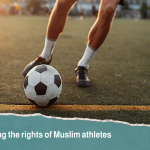