A global survey conducted by CGTN, which had more than 140,000 responses on many social media platforms, revealed that 84% of respondents believe that the US war against terrorism in Afghanistan has failed and that it was based on lies and disinformation. 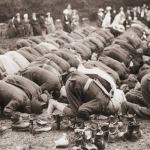 Local authorities in London, England announced plans for a new memorial commemorating Muslims who fought in World Wars. Mayor of […]