The Ministry of Education in Uzbekistan has decreed that schoolgirls are to be permitted to wear the hijab as part of a recently taken package of measures in response to demands for expanding religious freedoms in Uzbekistan, where Muslims constitute a majority. 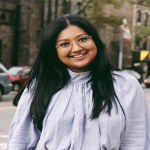 Bangladeshi-origin Shahana Hanif made history when she became the first Muslim woman elected to NYC Council. Hanif, who won with […]