Social media apps and websites saw a considerable surge in Muslim youth users this year amid national and international lockdowns. Muslims used SM to share their ideas, beliefs and culture, with ramadan, eidmubarak and hajj being the most popular hashtags. 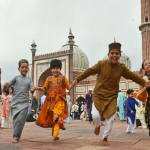 A survey by Pew Research Center on religious pluralism in India found a clear contradiction between Indians’ belief in pluralism, […]