Many protesters gathered in front of Worcestershire County prison in the UK claiming that a senior prison officer has repeatedly targeted Muslim prisoners who are practicing Islam. The Ministry of Justice confirmed an investigation is underway. 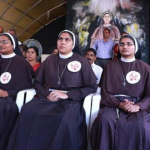 Four nuns walked out of a prayer service in Kerala, India in protest after a priest delivered a hate speech […]