Decline in living standards of Muslims in India

A recent survey revealed a decline in the quality of life of Muslims in India between 2014-2019. According to the study, 2% of the Muslim population used cars, ACs, PCs, TVs and fridges in 2014, but this percentage halved in 2019 to become only 1%. 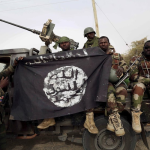 The future of ISIS in West Africa