Media reports revealed that the rate of murders inside northeast Syria’s al-Hol camp, amounted to one murder per thousand people, after ISIS began a series of revenge killings of its old followers to prove its power and intolerance with those who abandoned it. 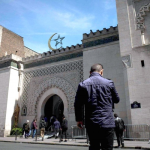