Press reports said that France has shut down one-third of 89 inspected mosques since November 2020 over radicalization allegations without providing clear evidence, in what analysts considered an ongoing drive against Muslims and their worship places. 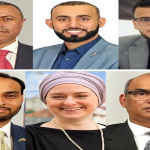 The city of Hamtramck, Michigan, will become the first US city to have its council composed entirely of Muslims, as […]

Islamic history in 3D in the Netherlands

The Islam Experience Centre (IXC) in the Netherlands ... Read More

Muslims in several Western countries have expressed their ... Read More

National Commission for Minorities in India said that ... Read More