National Commission for Minorities in India said that it had received complaints from Muslim, Christian and Sikh groups, calling for putting an end to the portrayal of minorities in Indian cinema in a humiliating and aggressive way that stirs hatred and violence. 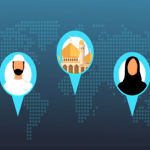