Muslims in several Western countries have expressed their shock after knowing that state bodies were secretly spying on mosques and worshipers under the pretext of combating extremism, a phenomenon described by the media as “suspicious acts fueled by Islamophobia.” 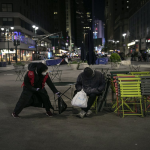 A new study found that Muslim Americans gave more to charity in 2020 than non-Muslims, despite making up just 1.1% […]