After Hindu right-wing groups had seized sites designated for Muslim Friday prayers in Gurgaon in the Indian state of Haryana, a number of the city’s residents offered their Muslim neighbours to use their lands and homes to gather and perform prayers freely. 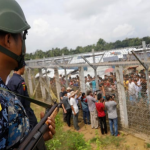