Argentina’s justice system will investigate allegations of war crimes committed by the Myanmar military against that country’s Rohingya minority under the legal premise of “universal justice” which holds that some horrific acts can be tried anywhere. 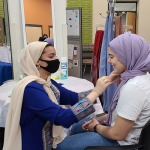 “A Day In Her Hijab” event at Madison College

Madison College, USA held the event “A Day In Her Hijab”, the goal of which was to normalize the hijab […]