«Returning to the Mount» group

Israeli media revealed that an extremist Jewish group arranges for its members to disguise themselves as Muslims in order to enter Al-Haram Al-Sharif and perform their prayers secretly there, in violation of international agreements that prevent them from doing so. 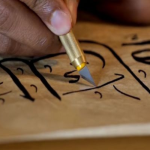 The world celebrates adding Arabic calligraphy to UNESCO’s Intangible Cultural Heritage List, in recognition of its aesthetics and ability to […]