International media said that EU officials are working to pass a new law that criminalizes the denial of the 1995 massacre of more than 8,000 Muslims in Srebrenica. Supporters of the law believe that recognition of what happened is the path to reconciliation. 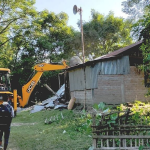 India has launched a new forced eviction drive aimed at displacing 106 families, mostly Muslims, in the state of Assam […]