The Muslim Rights Concern in Nigeria said female Muslim students face daily persecution in Lagos public schools over wearing the hijab, which shows that some confuse combating terrorism and extremism with Muslim women’s right to practice their rituals freely. 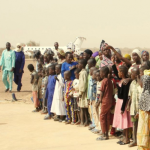